More information or RSVP for Marianne Williamson on Nov. 2 in Rochester.

Click through the RSVP links to see more information about the events, and register to hear the positions from these candidates on campaign finance reform & Big Money politics. 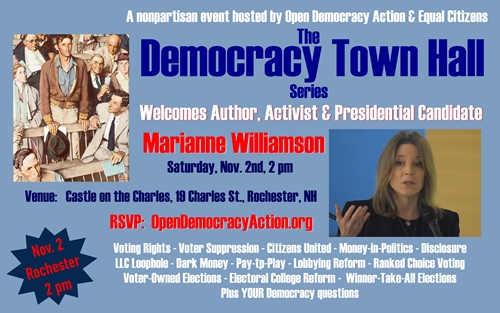 A dozen Open Democracy Action volunteers marched and did some street theater in the 2019 Milford, NH Labor Day Parade.  This year, our acting troop highlighted our current system of campaign bribery, and our proposed solution here in New Hampshire, HB 304, the Voter-Owned Elections Act, which uses small donations and $25 "Voter Dollars" certificates for registered voters to give to the candidates of their choice. 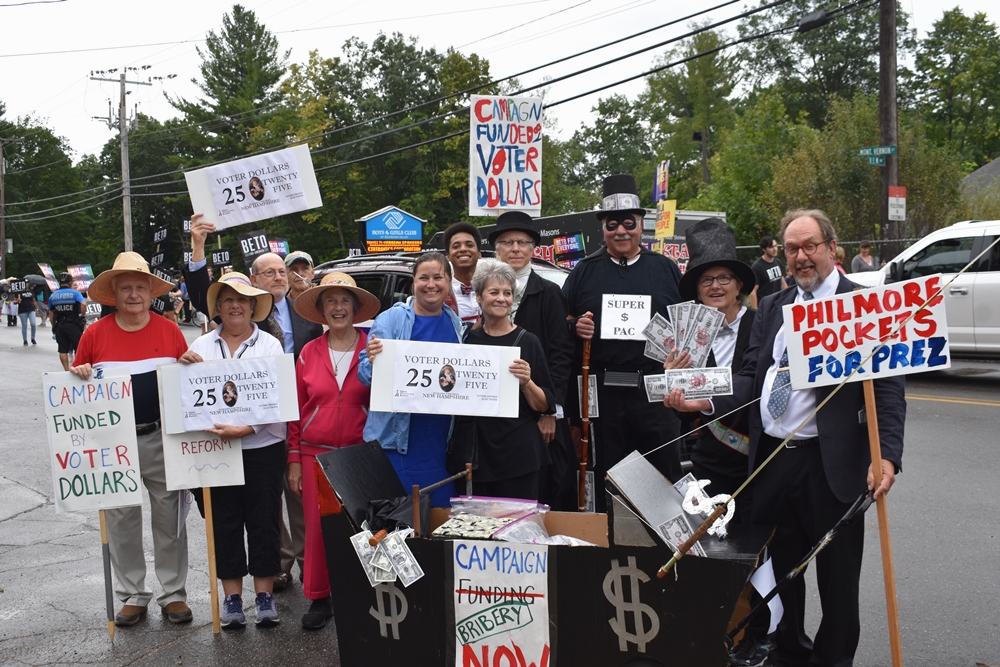 This Veto Must Not Stand

There have been six Democracy bills vetoed by Governor Sununu in the 2019 term of the NH legislature, chief among them, HB 706, the independent redistricting commission.

A veto override effort is underway, and we need every voter's help on this.  Will you do your part?

Go Here to find out what you can do to convince your legislators to override.  You got it this far, but Big Money forces convinced the Governor to veto it.   We need to convince the legislators that they need to make it right.

"All around the country, the public is becoming increasingly disenchanted with special interests dominating our democracy. Reform is brewing in New Hampshire, where, in 2019, legislators will introduce a 'Voter Dollars' bill to create a voluntary public funding system for state elections.

"The bill, drafted with bipartisan support, would give each registered voter four $25 certificates that they can contribute to participating candidates of their choice—similar to a program implemented in Seattle in 2017 and others being considered around the country, including in Albuquerque. Participating candidates would agree to only accept small donations and refuse money from lobbyists, businesses, and labor unions. This would give voters greater voice in government and provide candidates with an alternate path to power, allowing them to succeed without relying on wealthy private networks, corporate support, or out-of-state influence.

"Why is a system like this needed in New Hampshire? MapLight dove into the state’s campaign finance landscape to answer this question." 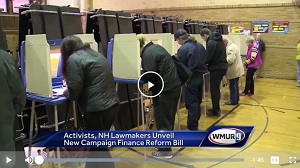 Open Democracy Action and its bipartisan Legislators’ Working Group today unveiled their proposal to create a voluntary alternative to the current system of privately-financed political campaigns.

“Voters across the political spectrum overwhelmingly agree that ‘the system is broken’ – and needs to be fixed, so that citizens’ voices can be heard,” said Open Democracy Action Executive Director Olivia Zink. “One of the fundamental principles of our government is that elected officials are supposed to represent the people, not campaign donors. But that has gotten lost in the flood of private money funding political campaigns in recent years.”

Making it clear that Open Democracy Action is not endorsing any candidate in this year’s congressional primaries, Bourdon said, “We do, however, endorse the idea that citizens should know where these candidates stand on the issue of campaign funding, before they decide how to vote.”

“We applaud the Democratic Congressional leadership for stepping forward yesterday with a campaign finance reform initiative. However, voters’ concern about the problem crosses all partisan lines,” said John Rauh, founder of Americans for Campaign Reform and now Chair of the New Hampshire voters’ group Open Democracy.

“Campaign reform was a major issue in New Hampshire’s 2016 presidential primary, and it’s still very much on voters’ minds as we welcome potential 2020 candidates to the Granite State. It’s a particular concern for New Hampshire’s Republican voters, who care deeply about whether government represents citizens or special interests.” Rauh said. “We look forward to hearing from Republican Congressional leadership about how the system should be fixed.”

Information about the Democrats’ initiative can be found at https://abetterdeal.democraticleader.gov/better-deal-for-our-democracy/

The evidence is overwhelming: Republican voters are worried about the consequences of special interest influence over elected officials.

The national conservative campaign reform group Take Back Our Republic is teaming up with Open Democracy Action to host a bipartisan candidates’ forum on Monday, May 14 starting at 1 pm in the Rich Room of the Warren B. Rudman Center at UNH School of Law (2 White Street, Concord NH 03301).

The forum will be preceded by a light lunch, starting at 12:30 pm, to allow candidates an opportunity to talk one-on-one with audience members. The audience will include members of both organizations. Open Democracy Action, based in New Hampshire, includes more than 20,000 members; Take Back Our Republic, based in Auburn, Alabama, has almost 50,000 members nationwide and about 800 in the Granite State.

All of New Hampshire’s congressional candidates – from both districts – have been invited to share their positions on campaign reform and take questions from the audience. To date, eight candidates are confirmed to participate in the forum: Naomi Andrews, Brian Belanger, Mark MacKenzie, Andy Martin, Douglas McEachern, Mindi Messmer, Terrance O'Rourke, and Chris Pappas.

“The myth that ‘conservatives do not want reform’ was countered with the South Dakota vote to end secret political contributions and gifts the night President Trump won that state 62% to 32%,” said Take Back Executive Director John Pudner. “Following that victory with this past Tuesday’s vote to end gerrymandering in Ohio, after it swung so hard Republican, shows conservatives are willing to vote for essential elements of reform.”

“Our system of privately financing our federal elections significantly limits our search for the leaders of our nation to those with wealth, the access to wealth, or a famous name. It also allows special interests to use their wealth to influence policy, whereas in a healthy democracy it is imperative that the voices of voters be heard and their perspectives considered,” said John Rauh, who founded Americans for Campaign Reform and is Chair of Open Democracy.

"Our great nation will not tackle crushing debt and healthcare spending, failing military strategy or climate change until candidates for high office can run competitive elections without selling themselves to big-money special interests," said Jim Rubens, a Republican who ran for U.S. Senate in 2014 and 2016.

All parts of the event are open to the press and public, free of charge. The forum will be moderated by John Pudner.

The late Sen. Warren B. Rudman (R-NH) championed campaign reform both during and after his service in the US Senate. His 1993 farewell address to the Senate included the directive: “Congress must pass campaign-finance reform, so our legislators can be free of endless fund-raising and indebtedness to special interests.”

The latest state poll found that 80% of voters – including 79% of Democrats, 74% of Republicans, and 85% of Independents – believe “big money” is a problem in New Hampshire elections. Only 14% believe voters have more influence than special interests.

The latest national poll found that 76% of voters – including 71% of Republicans and 84% of Democrats – believe government “is run by a few big interests looking out for themselves” (only 21% believe government “is run for the benefit of all the people”). Voters are looking for change: 65% think that new campaign finance laws could be effective in limiting the amount of money in political campaigns.

Getting big money out of politics: Where do we go from here?

Americans get it. We are divided on many issues, but the need to reform the way campaigns are funded is not one of them.

In a Bloomberg Politics national poll last year, 78 percent of respondents agreed that the Supreme Court's Citizens United decision−the ruling largely responsible for the deluge of political spending since 2010−be overturned. Eighty-seven percent want a campaign finance system in which the wealthy have no more political influence than the less well-off. Answers varied little by respondents' party affiliation or ideology.

Such results underscore broad consensus on the twin threads of this country's democracy movement: (1) curbing corruption and (2) ensuring an equal voice for all. The problem is understood.

But what about the solution? I wish I could say that simply overturning Citizens United will cure all ills. It won't. The real answer is−well, it's complicated. No standalone measure can do the job. We must move on a number of fronts both in Washington and here in New Hampshire.