Dark Money LLCs, Corporate Donations and Bills to Stop Them

When wealthy donors max out their individual donations to a candidate's campaign, they look other instruments to influence the election. Enter the lowly Limited Liability Corporation, or LLC. Due to a federal loophole, not only can an LLC make donations to a political committee or political party, those donations are totally anonymous. 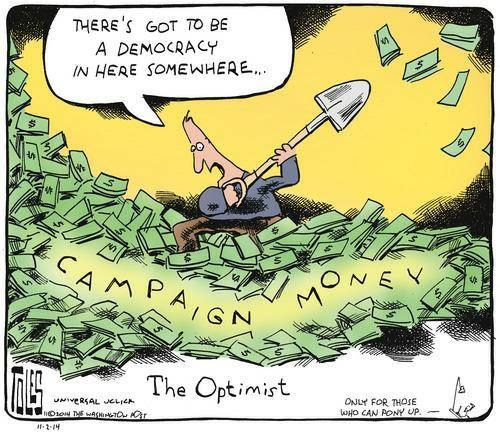 To combat this infiltration of money into campaigns, there are two bills are before the Senate Election Law and Municipal Affairs Committee, SB 155 and SB 156. SB156 would require individuals making political contributions via an LLC to reveal their name, and their share of the LLC's donation amount.

Here's another factoid: Since 2000 it has been legal for a business in NH to make a campaign donation directly to a candidate's campaign. (No influence there, eh?) See a further history later in this newsletter, but SB 155 modifies RSA 664 and prohibits that practice in New Hampshire. Businesses could continue to make contributions to political action committees, but not directly to the candidate.

We urge you to call or email the members of the Senate Election Law & Municipal Affairs Committee to let them know how important it is that we close those loopholes to keep our democracy from being infiltrated by the influence of dark money.

Delays in State House legislative services have now cleared, and the Voter-Owned Elections Act finally has a bill number: SB 304. Open Democracy Action has been visiting senators, answering questions about the bill and how Voter Dollars work. We anticipate a committee hearing in the week of Feb. 10, but it has not yet been posted. Now is a good time to write letters to the editor to help educate voters on how this bill benefits everyday voters, not big donors.

HB 505, allowing voters to vote for multiple candidates for an office;

HB 147, relative to appeals from recounts;

10:00 a.m. HB456, relative to persons required to register as a lobbyist. This bill removes the exception from required lobbyist registration for certain communications by an employee on behalf of his or her employer. Sponsored by Marjorie Smith , Martha Fuller Clark, Daniel Eaton, and Mary Heath.

11:15 a.m. HB519, relative to selection of delegates to an Article V convention. Prior to a U.S. Constitutional Convention being convened, this bill establishes guidelines for who shall represent New Hampshire at that convention. Delegates carry out both a state and federal government role, and have substantive power. As a result, democracy advocates have been wary about unintended consequences of a Constitutional Convention if delegates are not impartial, or who don't carry out the instructions of the legislature.

Need to call legislators on a committee?   Go here for phone numbers and links!

9:15 a.m. SB 156, relative to political contributions made by limited liability companies: This bill will fix a loophole in current federal legislation to get around campaign contribution limits by anonymously donating to an LLC corporation. The bill apportions the donation amounts by that person's share in the LLC, and requires that names and addresses be disclosed when reporting to the NH Secretary of State. Sponsors Senators Dan Feltes, Martha Hennessey, & Melanie Levesque, and Represenative Sandra Keans. Supported by ODA, recommend OTP -  Attend the hearing!

9:30 a.m. SB 155, relative to permissible campaign contributions by business organizations. Prior to the year 2000, RSA 664 barred “business entities” from making political contributions directly to a candidate. A court case deemed the language in RSA 664 too broad, and the legislature struck the “business entity” language from the law. As a result, for the last 18 years, business donations to candidates have not been prohibited. SB 155 restores the “business entity” language, and because language of allowing donations to “Segregated Funds” not controlled by the candidates – political action committees – had already been added, the bill is now acceptable to the courts. Important note: If this bill passes, SB 156 becomes moot, as an LLC is a business entity. Supported by ODA, recommend OTP  -  Attend the hearing!

10:00 a.m. SB 305, relative to voter registrations accepted by other state agencies. A so-called “Motor-Voter” bill, which allows a domiciled resident to register to vote when obtaining a NH State driver's license or identification. Supported by ODA with its voting rights partners.

10:00 a.m. Executive session on HB 486, relative to department of corrections procedures concerning the requirement for restoration of the voting rights of felons.

HCR 5 A resolution requesting the United States Congress to propose a constitutional amendment to reverse the ruling of the United States Supreme Court in Citizens United v. Federal Election Commission. Testimony was overwhelmingly in favor of this bill, including from ODA, with a huge turnout during the hearing. This bill is sponsored by Representatives Kat McGhee and Peter Petrigno from Hillsborough County. Supported by ODA, recommend OTP

Although the Election Law & Municipal Affairs calendar is not specific, Executive Session bills

SB 44, relative to election procedures, delivery of ballots, and assents to candidacy.

SB 66, relative to political contributions by candidates for certain offices.

Last week's ODA focus was on redistricting. The hearing for HB 706's extensive bill lays out a plan for a commission to convene every 10 years, comprised of selected citizens who are not highly political. It excludes political party leaders, lobbyists, big donors, but does have equal numbers of the two largest parties (1/3 + 1/3), as well as an equal share of smaller parties and independents (1/3). The hearing was well-attended and had only two speakers against the bill, one of whom was out of state.

ODA Policy Committee Co-Chair Rick Bourdon testified in favor of the bill, citing the “efficiency gap,” an analysis tool for identifying the impact of a gerrymandered voting district. Bourdon said,

“The 2016 data points the finger at Republicans, but it matters not to me which party did what when. Clear evidence from other states shows that the Democratic party is guilty of gerrymandering as well. It's time for an end to the practice. Redistricting for partisan advantage is undemocratic (small d) and flies in the face of the principle of one person one vote. A nonpartisan redistricting commission is the logical solution, a solution being chosen by more and more states across the country.”

Questions from legislators centered about reconciling this bill, calling for the commission, with CACR 9 , a NH constitutional amendment which takes some of the same steps, but by a different method. Open Democracy asks that both bills move forward, and that amendments can be put in place to make the bills complementary. Supported by ODA - This is a mission-critical bill, so please call your legislators.