URGENT Your phone calls are needed to the members of the Senate Election Law and Municipal Affairs Committee in support of SB 304, ODA's top priority bill which is being heard in committee this Wednesday, February 13th at 9:30 AM, Legislative Office Building, Room 102. The senators need to hear from you why public financing of elections, which have been successful in Maine, Connecticut, Arizona, Washington State, Michigan and other states, would help keep election funding in the hands of the average voter, not the less than 1% of wealthy New Hampshire donors or out of state donations.. 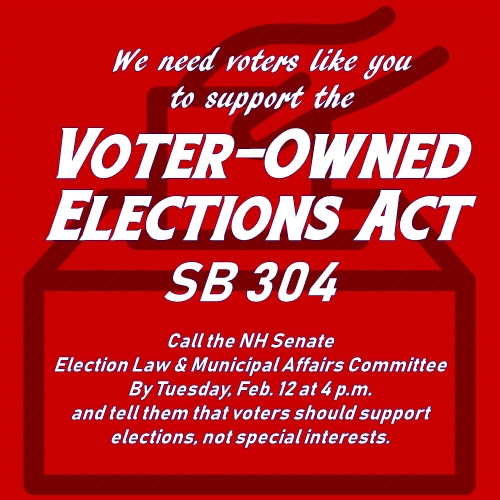 CALL the members of the committee by Tuesday, February 12 at 4 p.m.

10:00 a.m. Subcommittee work session on HB 531, relative to the delivery of absentee ballots cast by elderly or disabled citizens.

11:00 a.m. Executive session on: HB 105, relative to domicile residency, voter registration, and investigation of voter verification. HB 105 is an attempt to reform last year's HB 372, which put layers of requirements for medium-term residents in order to vote, particularly for students at NH universities and locally-posted military personnel.

Open Democracy is working with other voting rights allies in support of these bills. 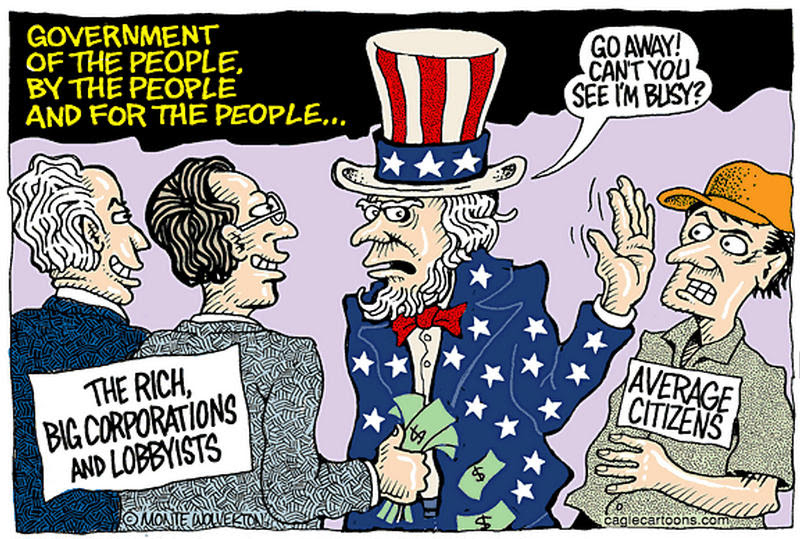 9:30 a.m. SB 304-FN-A, The Voter-Owned Election Act hearing. This bill needs your attendance at the hearing. Supported by ODA,

campaign finance law, and lobbying matters. One of the criticisms of our current campaign and voting rights oversight is that it lacks enforcement. This bill directs the attorney general to hire the staff necessary to take action as necessary.

10:30 a.m. SB 71, relative to the election of delegates to party conventions.

10:00 a.m. Session Day – The NH House and Senate will convene in Representatives' Hall to hear Governor Chris Sununu's budget address. Following the address, the NH House will meet in session and consider the following democracy bills:

HB 297, relative to political advertisements on behalf of political committees or advocacy organizations.

OUGHT TO PASS. Supported by ODA To promote transparency, please vote to support this bill.

Rep. Wayne Moynihan for Election Law:  "This bill requires that any political advertisements made on behalf

advertisements as the entity registered with the Secretary of State. The committee received clear evidence

a way to imply it was from a NH community or source when in fact it originated from out of state entities.

This bill takes a small step toward insuring full disclosure of those participating in NH elections." Vote in committee, 19-0.

HB 429, establishing a committee to study ways to improve civic engagement in New Hampshire. OUGHT

TO PASS. Supported by ODA Please send the message that civic engagement is critical to our state's democratic republic values.

Rep. William Pearson for Election Law. "By establishing a committee to study civic engagement in New

democratic tradition of high voter turnout. While New Hampshire’s turnout may be envied throughout the

country, the committee recognizes that voter participation is far lower in municipal and mid-term elections.

Furthermore, the committee sees a study of these issues as providing a conduit for both new and experienced

voters to become even more aware of their crucial role in the process." Vote in committee, 19-0.

One of the most consequential bills of the last week was SB 155, an effort to reinstate a ban on corporate donations from a company's treasury. This ban had been in effect for decades, but a court opinion caused the legislature to lift a ban on “business entities” from making donations, while leaving in effect a ban on other organizations such as trade unions. Open Democracy Action Policy Co-Chair Rick Bourdon testified in support of this reinstatement:

“The intent of SB 155 is to provide the fix called for by the Court that many years ago, barring once again direct contributions from businesses to political campaigns. Will this change run into the same legal problems that arose in 1999? Short answer: No. The new language refers to "business organizations," which are defined in RSA 664:2 as:

RSA 664:2, XVI. "Business organization" means any enterprise, whether corporation, partnership, limited liability company, proprietorship, association, business trust, real estate trust or other form of organization, organized for gain or profit, and includes any enterprise which is expressly made exempt from income taxation under the United States Internal Revenue Code of 1986. It does not include a political committee as defined in RSA 664:2, III, or the political committee of a political party, as defined in RSA 664:2, V.

Because political committees are excluded from the business organization definition, the new wording satisfies the court's objection in 1999 that "segregated funds" had been unconstitutionally banned.”

I strongly encourage the Committee to vote Ought to Pass on SB 155.

Editor's note: Rick's testimony points out an error we made last week regarding a corporation's ability to still use restricted funds to support campaign activities. Sorry for the error.

SB 156 , the subject of last week's NHDR lead article, closes a loophole allowing the use of limited liability corporations to launder campaign donations from the same individual or company. ODA Executive Director Olivia Zink testified that it was about time the legislature got engaged in this exploitation.

“We need to reduce the influence of big money in politics, and increase the voices of average citizens. This bill provides transparency and accountability. The time is now to fix the LLC Loophole. The Legislature has an opportunity this year to start reviewing and repairing New Hampshire’s campaign finance laws. In 2010, gubernatorial candidate John Stephen caused a stir when he raised over $100,000 from 30 limited liability corporations at two addresses in Massachusetts and Connecticut that were traced to Dunkin’ Donuts franchises . . . Everyone needs to plays by fair common sense rules and be held accountable,” said Zink.