Voters overwhelmingly agree that our current campaign finance system is broken. The root problem is that the system is based entirely on private contributions, often large donations from a small, unrepresentative slice of the electorate. We need a competing system that allows candidates to run viable campaigns with small contributions from ordinary citizens: Voter-Owned Elections.

What can YOU do? Tell your NH Senator and Representatives that you want voter-owned, publicly financed elections! 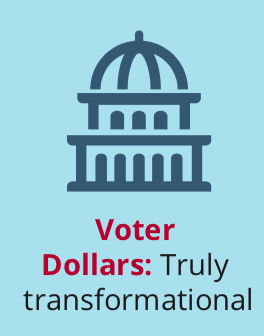 The basic model. The proposed system is entirely voluntary. Qualifying candidates for governor and executive council are eligible to receive “Voter Dollars” and, if they win their primary contests, additional grants. In election years, registered voters receive four certificates, worth 25 Voter Dollars each, that they may contribute to participating candidates of their choice. The Voter Dollar approach is truly transformational, incentivizing candidates to seek contributions from a broad swath of the electorate, and incentivizing everyday citizens to identify candidates who deserve their support. New Hampshire's very late primary makes it difficult for candidates to raise enough money for the general election from small donations alone. Grants for primary winners solve that problem.

Requirements of candidates. Participating candidates must agree not to accept aggregate private contributions from any one donor greater than $125 (for council) and $250 (for governor) for the primary, similar amounts for the general election. No more than 10% of private contribution totals may come from out-of-state sources, and candidates may not accept contributions from businesses and lobbyists. There are also strict limits on the use of personal funds and funds carried over from previous campaigns, plus caps on the amount any one candidate can receive from Voter Dollars.