For campaign finance and Big Money politics reformers, “compromise” can be hard to swallow, especially when the power of the voters is at stake. A bipartisan compromise amendment this week during the Senate committee hearing for HB 706 weakens the power of the voters in some respects (see article below), but satisfies the constitutional concerns by some legislators, and may have strengthened the bill in the eyes of the Governor.

“There are no problems we cannot solve together,
and very few that we can solve by ourselves.”

Open Democracy Action supports this compromise. New Hampshire voters might not get as pure a bill, but they will get a bill that is palatable to both parties and the Governor – and voters get a big step forward in Democracy if not a giant leap.

While the majority Democrats were likely to pass HB 706, a compromise amendment to the bill to assure more Republican support and make the bill more palatable to the Governor was proposed in Senate Election Law and Municipal Affairs last week. The amendment was proposed by prime sponsor Rep. Marjorie Smith and Senator Jim Gray. 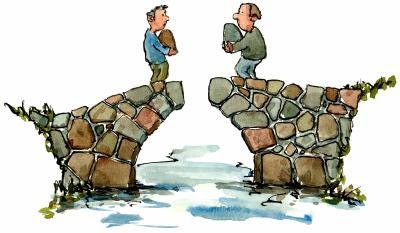 As originally proposed, the 15-member nonpartisan redistricting commission was chosen from a pool of 45 Republicans, Democrats and third party/independents. That pool would not include party leaders, legislators or their family members, big donors or lobbyists. However, the amendment throws out that process, including the prohibitions, and instead creates a pool from applicants who apply via the Secretary of State's office. The applicants must disclose their voting party affiliation, past offices held, and lobbying activity. Current state or federal legislators are prohibited, but their family members are not. Big donors are not prohibited, as was the case with the original bill.

The amendment also adds a layer of review. Should the full Senate pass the bill, the bill would return to the House for a vote on the amended bill prior to going to the Governor's desk.

The amendment appears to have softened Governor Sununu's position. Previously the Governor had said he was satisfied with the current 2010 districts drawn by then House Speaker William O'Brien. The process was controversial, as outlined in a timeline by Ballotopia. However, in an interview with the Union Leader this week, Governor Sununu stated, “I’ll see where the final bill ends up,” he said. “The initial bill they put forward was incredibly complex. It was well-intended but not very practical in how it was implemented, but where the final bill ends up ... we’ll be interested in taking a look,” said Sununu.

Open Democracy Action has testified for the original bill and supports the amendment. We expect HB 706 to be in the full Senate by mid May. Supported by ODA

After sailing through both the House and Senate Elections Law committees , the full Senate passed HB 297 on a voice vote. This bill takes a small step toward insuring full disclosure of those participating in NH elections by making sure political advertisers are registered with the Secretary of State. Overwhelming votes in the House & Senate committees should convince Governor Sununu to sign the bill in the public interest.  Supported by ODA

SB 206 would prevent public utilities from passing on to customers some of their costs for lobbying and other political activity. In sending the bill on to the House, the vote was 24-0 in the Senate, and the House Election Law committee concurred, endorsing it 18-0 in a nonpartisan vote. A late change to the bill expanded the definition of lobbying and political activity, but the bill was added to the upcoming session's consent calendar of noncontroversial bill and is expected to pass. Supported by ODA

A packed hearing room and several speakers sent a message of reform to the Senate Elections Law & Municipal Affairs committee. A sweeping proposal for amending the U.S. Constitution, HB 504, came before the Senate Elections Law & Municipal Affairs committee last Wednesday. The legislation calls on the U.S. Congress to support a constitutional amendment which allows Congress and state legislators to regulate money in elections and lobbying, and to require nonpartisan redistricting of voting districts, doing away with gerrymandering. It also calls for a public hearing about the amendment.

Several Open Democracy volunteers testified, several mentioning the 82 New Hampshire towns which passed resolutions calling for the overturning of the Citizens United decision, along with Open Democracy Action's Bob Perry and Rick Bourdon. Democracy allies also testified, including American Promise's Ben Gubits and Jim Rubens, New Hampshire anti-corruption activist and New England chair of Take Back Our Republic.   No one testified in opposition to the bill.   Supported by ODA

10:00 a.m. Subcommittee work session on SB 70, relative to vacancies among primary candidates and prohibiting a candidate from receiving the nomination of more than one party.

SB 71, relative to the election of delegates to party conventions;

SB 156, to close the LLC Loophole, passed the Senate along party lines, 13 Democrats supporting ans 11 Republicans opposing. The LLC Loophole is exploited by donors who want to anonymously make donations to exceed federal donations to candidates. SB 156 would require disclosure of donors and amounts, but due to the Citizens United decision, can't limit the amounts.  Supported by ODA

SB 70, relative to vacancies among primary candidates and prohibiting a candidate from receiving the nomination of more than one party.

The House has two sessions this week, Wednesday, May 8 at 10 a.m., and Thursday,May 9 at 10 a.m. The most important Democracy bill facing the legislature is SB 206 with a late amendment.

The Senate next meets in full session on Wednesday, May 15 at 10 a.m. There are important Democracy bills pending, including HB 706. Next week's New Hampshire Democracy Report will confirm the docket.

New Hampshire's campaign finance laws have a rich history, and advocates from the left and right are hard at work to reform them. In this special community forum, which will focus exclusively on state level campaign finance law and reform, leading advocates from the left and right will speak on and debate the issues on one stage.

Free and open to the public (space limited), local residents are invited to attend this unique bi-partisan forum to learn about campaign finance law, efforts to reform them, and how campaign finance affects elections and democratic representation. After a moderated debate, the participants will take questions from the audience.

Moderated by State Representative Kathy Hoelzel, the forum will feature Steve Marchand from the left and Greg Moore from the right.

Doors will open at 6:30 pm, and the event will start at 7:00 p.m. Iber Holmes Gove Middle School Cafeteria, Raymond. Free and open to the public. RSVP Required. Please CLICK HERE. 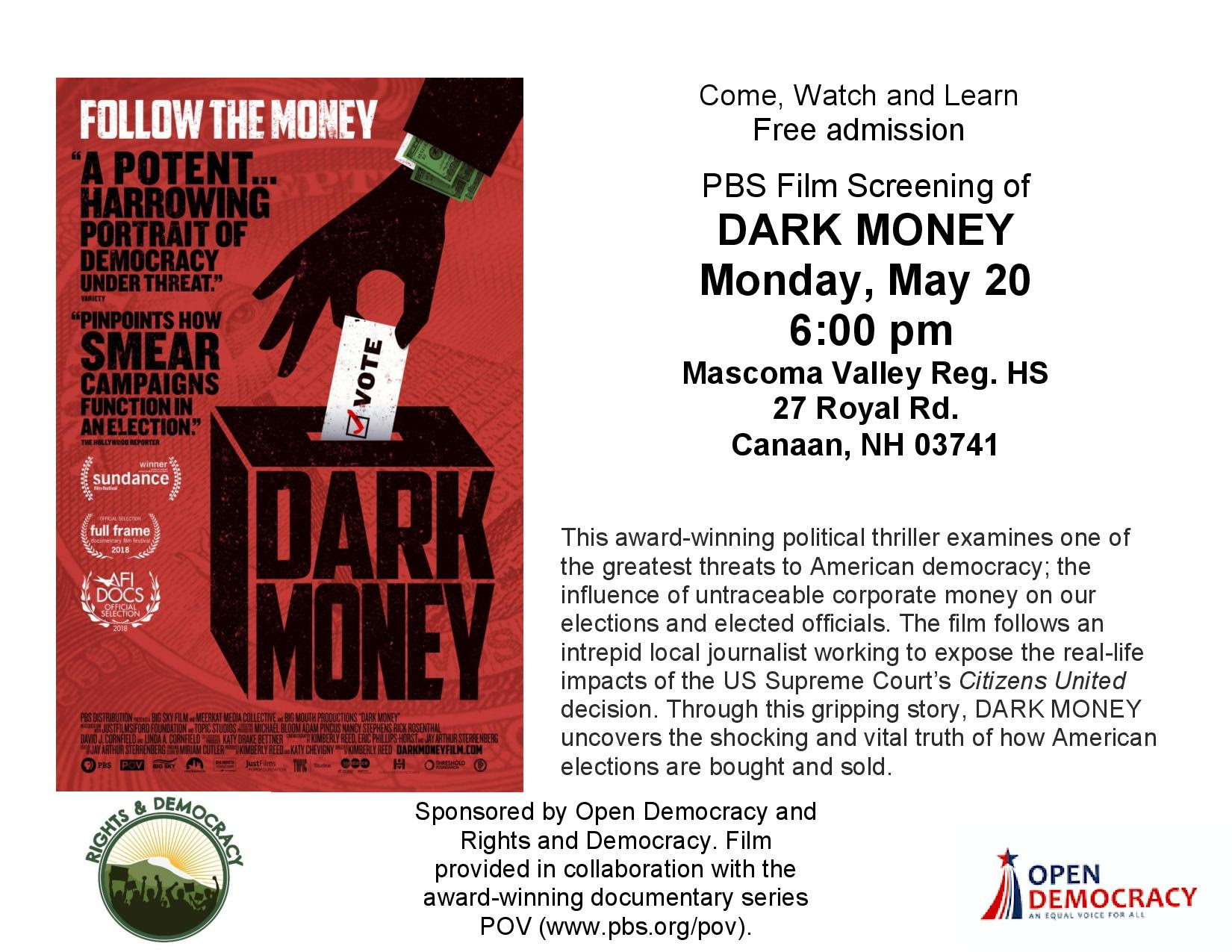 democracy; the influence of untraceable corporate money on our elections and elected officials. The film follows an intrepid local journalist working to expose the real-life impacts of the US Supreme Court’s Citizens United decision. Through this gripping story, DARK MONEY uncovers the shocking and vital truth of how American elections are bought and sold.

There will be a panel discussion following the film.

Free and open to the public, this is event is sponsored by Open Democracy, Take Back Our Republic, American Promise, Wolf-PAC and Rights and Democracy.