Full House Vote this Wednesday – Calls Needed to All Reps

Your calls, letters, attendance and testimony to the House Elections Law committee helped move the bill to create a non-partisan redistricting commission, HB706, out of committee by an impressive 20-0 vote in last week's executive session. The bill now moves to the House floor as a “consent calendar” bill this week, Wednesday.

This extensive & complicated bill lays out a plan for a commission to convene every 10 years, comprised of selected citizens who are 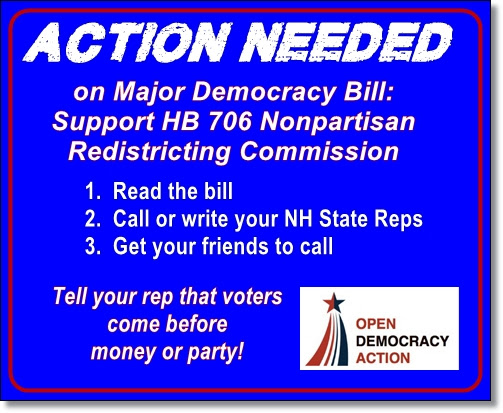 not highly political. It excludes political party leaders, lobbyists, big donors, but does have equal numbers of the two largest parties (1/3 + 1/3), as well as an equal share of smaller parties and independents (1/3). Similar to a jury selection process, it begins with a pool of 60 commission candidates, then is whittled down to 15, while maintaining the same 1/3 ratios. Should the redistricting plans fail to be adopted by the House & Senate, the NH Supreme Court would intervene.

Because it has a financial component, if it passes this week, its next stop is the House Finance Committee, then back to the full house for approval before heading to the NH Senate. It is important that we have a substantial winning margin on Wednesday, Feb. 27 to help pave the way, so call representatives Monday & Tuesday are essential! Feel free to use the “Action Needed” graphic for your Facebook posts.

Another redistricting bill before the house, NH Constitutional amendment CACR 9, permanently establishes a redistricting commission. This bill was retained in committee, pending the outcome of HB706.

Update on SB 304: The Voter-Owned Elections Act vote in committee is close –

Your Calls are Needed

After a well-attended hearing with a dozen supporters testifying, our top priority bill SB 304 has not yet had an executive session vote in the Senate Election Law and Municipal Affairs committee. We anticipate a committee vote Wednesday, March 6. Volunteers from the ODA Policy Committee say the vote is close, with Senator Morgan a leaning 'no' vote. Although all senators should be called, it is CRITICAL that you if you live in Chester, Brentwood, Kingson, East Kingston, Exeter, Epping, Sandown, and Danville that you take action. Let District 23's Senator Morgan know that your communities support public financing because it keeps control of our elections in the hands of the voters, not the less than 1% who currently fund our elections. 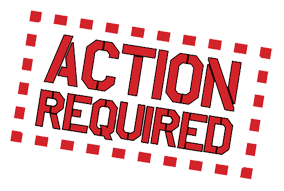 The Democracy bills below come to the House floor during Wednesday's Session (Continued on Thursday, February 28, as necessary.)

OTP = Ought to Pass    ITL = Inexpedient to Legislate

Writing for the Election Law committee, Rep. Wayne Moynihan: “In NH and in other states the process of redistricting has routinely becomes an often bitterly contested, expensive and litigated, partisan battle. The word frequently used to describe the result is “gerrymandering.” This bill creates a framework in statutory law which will enable NH to have the next redistricting process conducted by an independent commission. The bill is designed to have the redistricting process undertaken by 15 citizens, selected from a pool of 45 citizens who fulfill the qualifications set out in the bill, including party, non-party status, and with as little partisan impact as is reasonably possible. The commission is independent but the process continues to involve the Secretary of State, and the elected leadership of both the NH House and Senate. The process leaves the ultimate decision on the commission’s plan in the legislature as our NH Constitution requires. 21 other states have adopted an independent process for redistricting. This NH independent redistricting commission will put the interest of voters, constituents, and communities of common interest ahead of purely political considerations. Vote 20-0.”  Recommend Ought to Pass by ODA with a roll-call vote.

HB 152, increasing the threshold for reporting by political committees. In a 12-7 vote, the Election Law committee recommended ITL on raising the the ceiling for reporting campaign donations from $25 to $100. Open Democracy Action, testified against this bill, arguing that this change would reduce transparency. The committee agreed, with Rep. Paul Bergeron commenting “that New Hampshire citizens “have the right to know who is funding their elections.” OPPOSED by ODA. Vote 'no' and confirm the ITL with a roll-call vote.

The Election Law committee did not agree that candidates registering for the NH Primary should disclose their tax returns. The committee felt that such a requirement was not in keeping with the spirit of a “competitive and participatory primary. A related bill, HB 440 was also vote ITL.

HB 345, relative to certification of devices for the electronic counting of ballots. OTP WITH AMENDMENT.

A strong 20-0 vote for a bill which establishes rules for Ballot Law Commission review of older ballot counting devices. The bill was supported by the NH City and Town Clerks Association and the NH Municipal Association.

HB 535, relating to early voting for persons aged 60 or older. ITL, 20-0 The Election Law committee did not agree that special consideration be given for early voting for voters 60 and older, and cited implementation issues.

HB 588, relative to presidential nominations. OTP. On the recommendation of the Ballot Law Commission, the committee approved language in existing law giving the ability of a candidate not recognized by a party to register for the primary under that party. Vote 20-0.

HB 651, allowing the use of campaign funds for child care expenses. OTP WITH AMENDMENT. Rep. William Pearson for Election Law. “This bill makes NH law congruent with the Federal Election Commission Advisory Opinions by allowing candidates for public office to use their campaign contributions for childcare expenses.” The Election Law Committee recognizes the immense burdens candidates for public office must overcome in New Hampshire and sees this bill as ameliorating some of those difficulties. Vote 20-0.

THURSDAY, FEBRUARY 28, 2019 (If Wednesday's docket is not finished)

10:30 a.m., SB 206 would prevent public utilities from passing on to customers some of their costs for lobbying and other political activity. The Senate Energy and Natural Resources Committee hearing will be. (Sen. Feltes and Rep. Luneau are local sponsors.) Supported by ODA.

We anticipate a committee vote on SB 304, the Voter-Owned Elections Act during this Executive Session.

11:00 a.m. SB 158, relative to town and city membership in a nonprofit, nonpartisan organization and prohibiting recipients of municipal or county funds from using such funds for lobbying.

Next sessions for the full NH Senate and full NH House, 10 AM

In a victory for transparency HB 297 passed the full House and goes to the Senate. It would fix a flaw in an existing law that requires PACs and 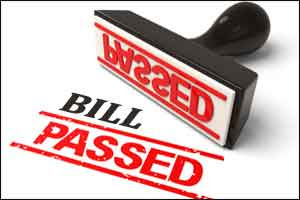 other political advocacy organizations to have their name on their signs and fliers. The bill would require the name to match that on file with the Secretary of State. Variations can create confusion, foul up online searches and thwart the goal: Letting voters know who is trying to influence them. The Senate Election Law committee hearing will be March 13, 10:30 a.m., LOB 102. (written by Joe Magruder, ODA volunteer) Supported by ODA

HB 429 Endorsing a commission to study ways of increasing civic engagement is pretty mom-and-apple-pie legislation, but important nonetheless. Open Democracy Action is pleased to see this legislation pass in the full House last week and make its way to the Senate in March. Supported by ODA

SB 8, the NH Senate's redistricting commission hearing was not well attended by supporters, unfortunately. Where the HB 706 was overwhelmingly positive, SB 8 testimony was equally split pro and con. Senators need additional contact from voters who support the bill to make sure legislators can gauge the wide support the bill has. Supported by ODA

SB 230 funds two additional attorneys and and investigator in the NH Attorney General's office to “who shall work exclusively on election law and lobbying matters,” finally adding teeth to campaign and lobbying compliance. The Senate Election Law and Municpal Affairs committee endorsed the bill as OTP on a 5-0 vote. A vote on Supported by ODA

HB 504, Unlike the resolution HCR 5,which directs our Congressional delegation to take action on overturning Citizens United but can't be ratified by the NH Senate, HB 504 requires specific U.S. Constitutional amendment language, assembles a state committee to hear input from the public, and requires that redistricting not favor one political party over another. The bill passed out of the Legislative Administration committee this past week OTP with a vote of 8-6. There is no date as of yet for the full Senate. Supported by ODA