Film: Suppressed, The Fight to Vote

Posted by Doreen Desmarais 747sc on

You are invited to a screening of the film SUPPRESSED, The Fight to Vote and a facilitated discussion afterwards.

Social hour begins at 5 pm and the film starts at 6. 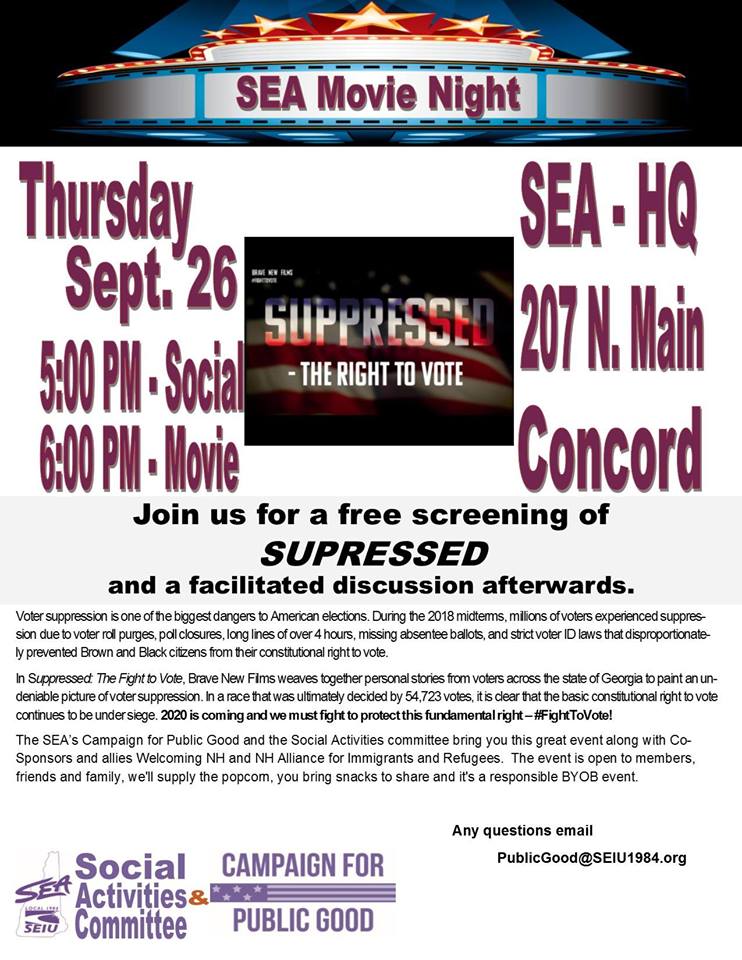 Voter suppression is one of the biggest dangers to American elections. During the 2018 midterms, millions of voters experienced suppression due to voter roll purges, poll closures, long lines of over 4 hours, missing absentee ballots, and strict voter ID laws that disproportionately prevented Brown and Black citizens from their constitutional right to vote.
In Suppressed: The Fight to Vote, Brave New Films weaves together personal stories from voters across the state of Georgia to paint an undeniable picture of voter suppression. In a race that was ultimately decided by 54,723 votes, it is clear that the basic constitutional right to vote continues to be under siege. 2020 is coming and we must fight to protect this fundamental right – #FightToVote!
The SEA’s Campaign for Public Good and the Social Activities committee bring you this great event along with Co-Sponsors and allies Welcoming NH and NH Alliance for Immigrants and Refugees. The event is open to members, friends and family, we'll supply the popcorn, you bring snacks to share and it's a responsible BYOB event.
Any Questions email [email protected]
WHEN
September 26, 2019 at 5:00pm - 8pm
WHERE
SEA Hall
207 N Main St
Concord, NH 03301
United States
Google map and directions
CONTACT
David Holt ·