Voters' calls for fair, nonpartisan redistricting were IGNORED and the Congressional Voting Districts have been rigged.

It's time to fight back.

The majority party in charge of the Special Committee on Redistricting has chosen to ignore the hundreds of people who testified for fairness and transparency, and the 561,000 voters in 74 towns who voted for the NH Resolution for Fair Nonpartisan Redistricting, and put forth a Congressional district proposal which is the most radical change since 1883.  It gerrymanders 75 towns to engineer a Republican advantage in Congressional District 1, and packing Democratic-leaning towns into an uncompetitive District 2 where no Republican vote matters.

The Special Committee on Redistricting passed both the Congressional and NH House maps on November 9 in 8-7 party-line votes.  The maps now come before the full NH House on January 6th, and it is likely to be a close vote, with some Republican reps very unhappy with the stink of the gerrymandered map, and others unhappy with the new House maps - some even redistricted out of a job.

[Download this analysis of the Republican, Democratic & Map-a-Thon Congressional maps]

[See the analysis of the NH House Maps]

Why do fair maps matter?  The Congressional districts are so rigged to be uncompetitive that no Democrat can win in Congressional District 1, and no Republican can win in Congressional District 2.  Gerrymandering makes votes matter less because of the disparity of parties, and as voters find out that the election is rigged, they don't bother to vote.   Legislators who know they are going to win anyway don't work hard to win over the voters or to serve you after they get elected.  Primary elections become more important, as extremist candidates can't get sorted out in the general election.

None of us are redistricting experts, but there are many ways to help and push back against these unfair maps.

#1  Call Your State Rep  Ask them to vote the Congressional & House maps down, and amend them with a map that is competitive and fair to all parties.    Find their names, phones and emails here:  http://gencourt.state.nh.us/house/members/

#2  Call Your State Senator and ask them to not make the same insulting and immoral map-rigging to the Executive Council and NH Senate maps.  http://gencourt.state.nh.us/senate/members/wml.aspx

#3  Write a Letter to the Editor (LTE) - We want to FLOOD the newspapers with outraged voter letters, DEMANDING that the Congressional map be with drawn.  Here's a great tool by the NH Sierra Club with links to the newspapers and a guide to length.    [See LTEs by others in our new Google Drive of Redistricting LTEs] - please don't copy, but use for inspiration.

#4  Share your LTE on Social Media - Take that LTE and post it in your social media, and to your local town political committee Facebook Group or other activist groups to which you may belong. 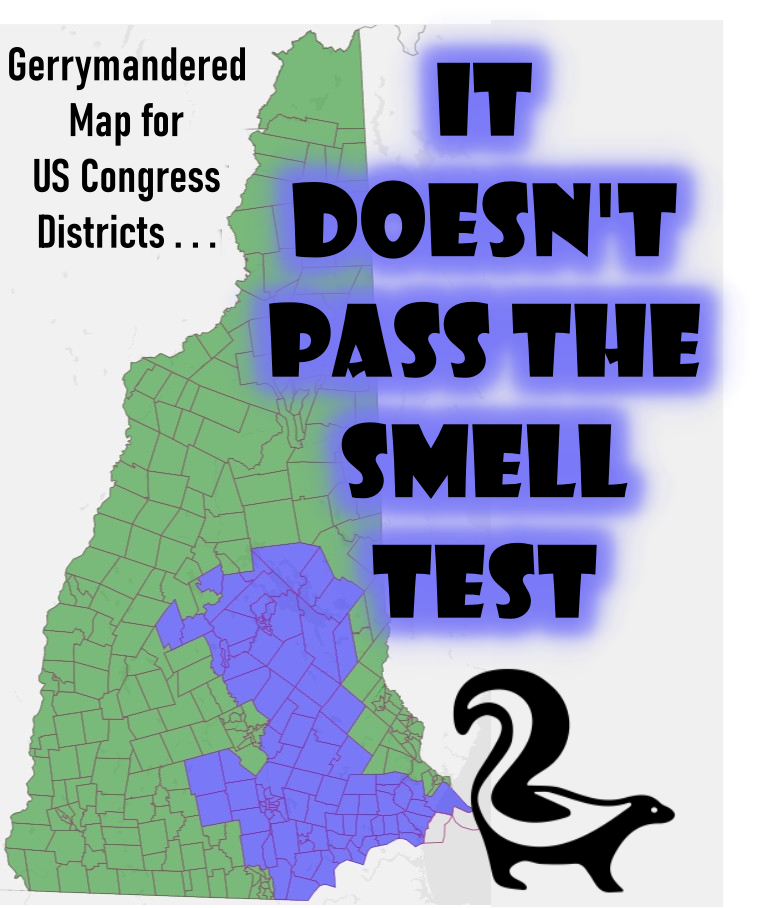 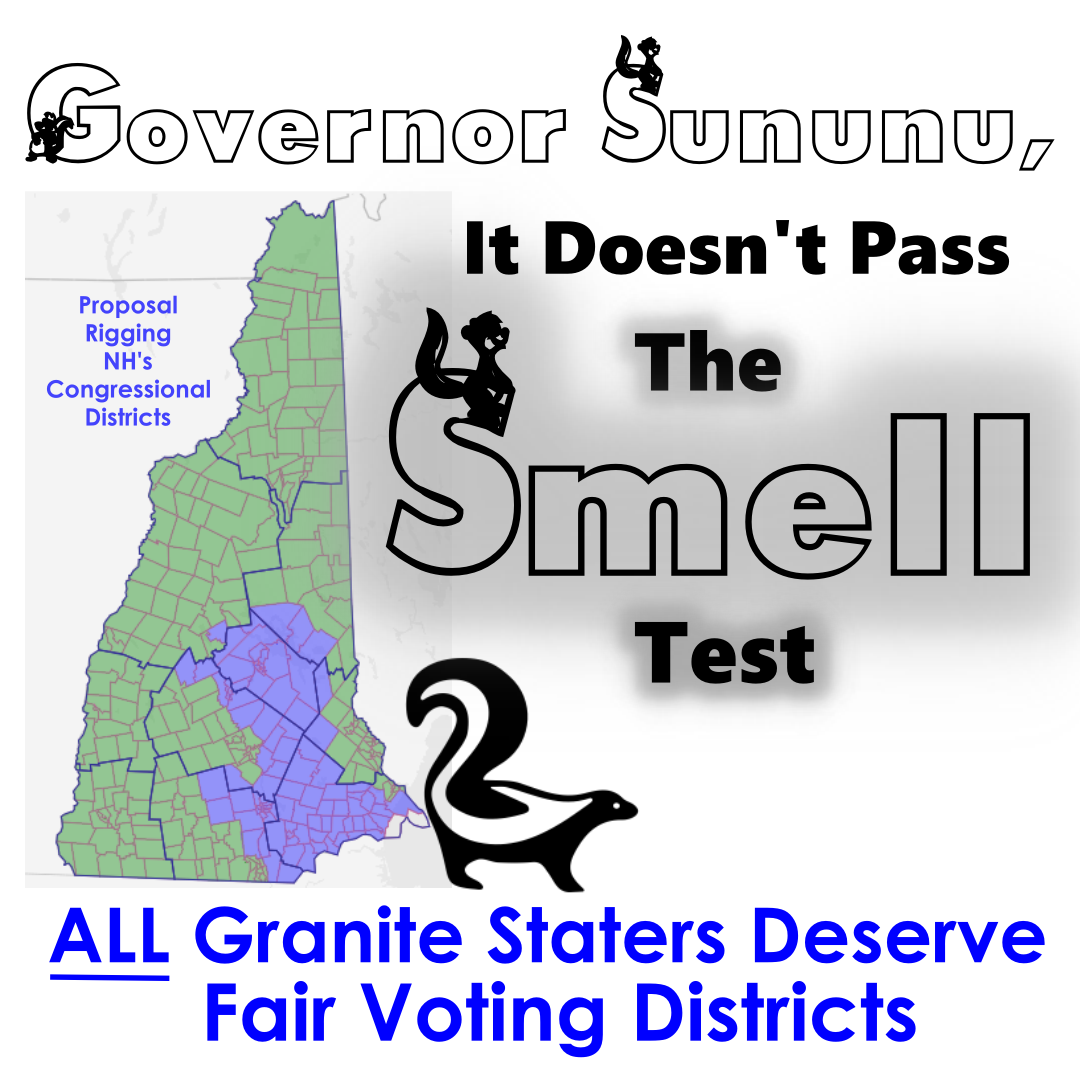 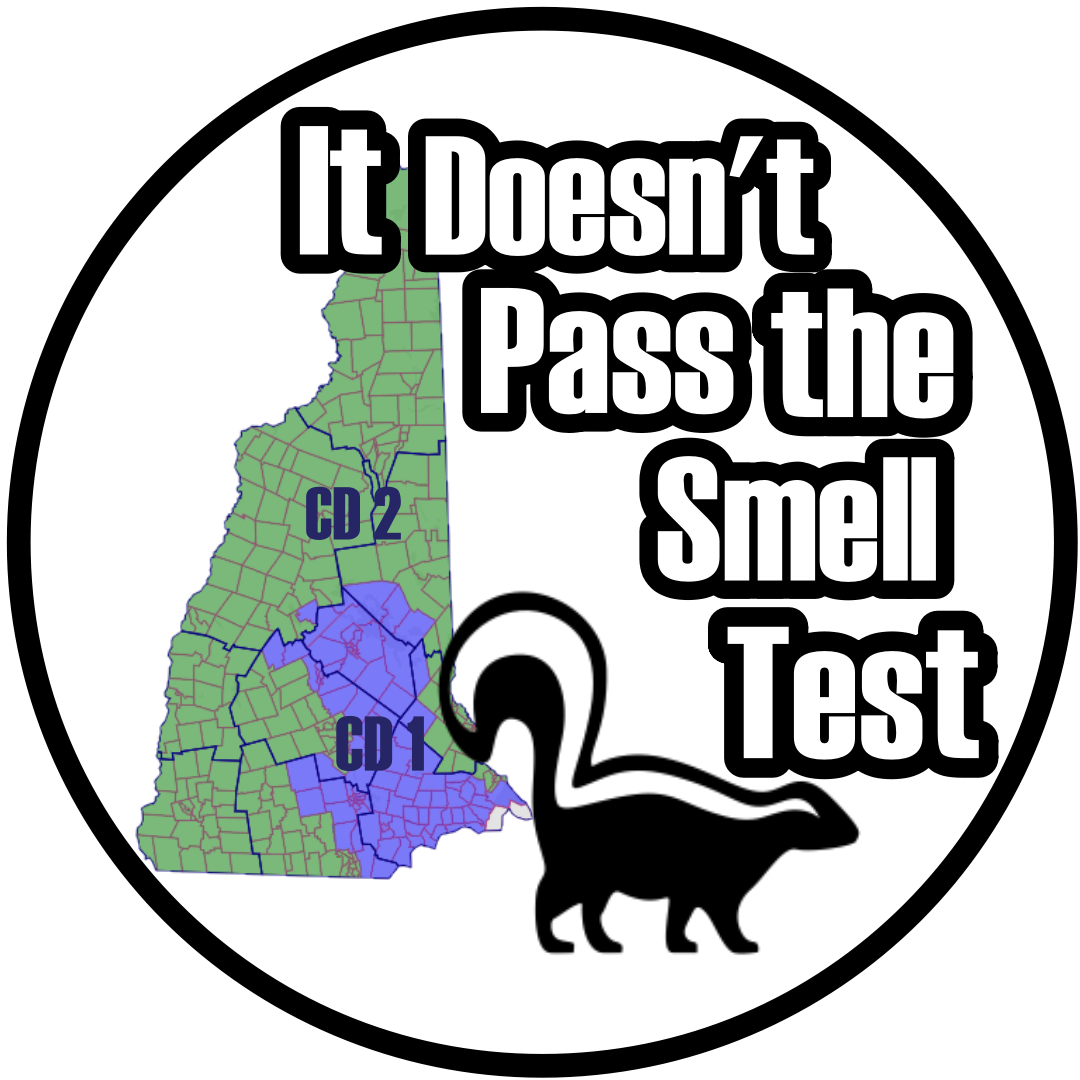 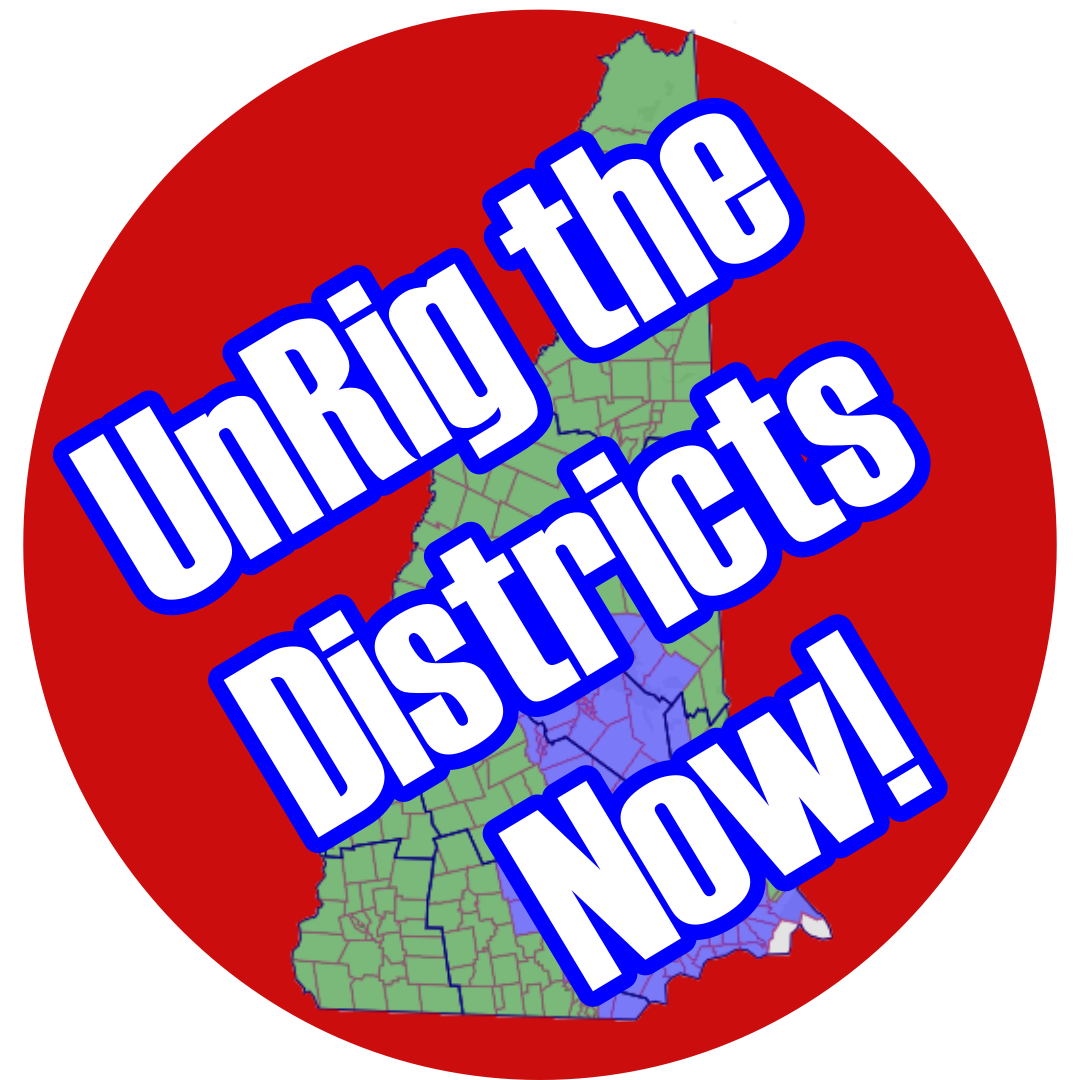 #7   Speak to Your Local Town Political Committee -  Many local committees have been active in this fight. Get people who CARE off the sidelines and send them to this page!

# 8  Get Local Opinion Leaders to Speak Out -

#9   Write an Open Letter (LTE) to the Governor  -- Now that we know the Governor is running for reelection, we need to remind him, and the voters, of comments he made earlier this year on a couple of occasions.  Writing directly to the Governor has proven not to be effective.   We've instead evolved to writing "open letters" in the form of a letter to the editor sent to your local paper, and simultaneously getting it out in your social media channels.  Here's his quote from New Hampshire Public Radio's "The Exchange":

"The House has their process and they put this committee together and it has to be done in a bipartisan way and be transparent I always say with redistricting, it's got to pass the smell test. You’ve got to be able to look at the map and say, OK, at first blush, this makes general sense. We're not, like, twisting around here and there. Whatever we do, it has to be fair, it has to be balanced."  - Governor Chris Sununu on NHPR's The Exchange, earlier this year.

As we all know, this was NOT done in a bipartisan way, it DOESN'T pass the smell test, and it is NOT fair or balanced.

#10  Get the Citizens of Your Town to Speak Out -- Working through local committees, Facebook Groups (if allowed) and your network of friends, get them to contact their reps on your town's NH House District: 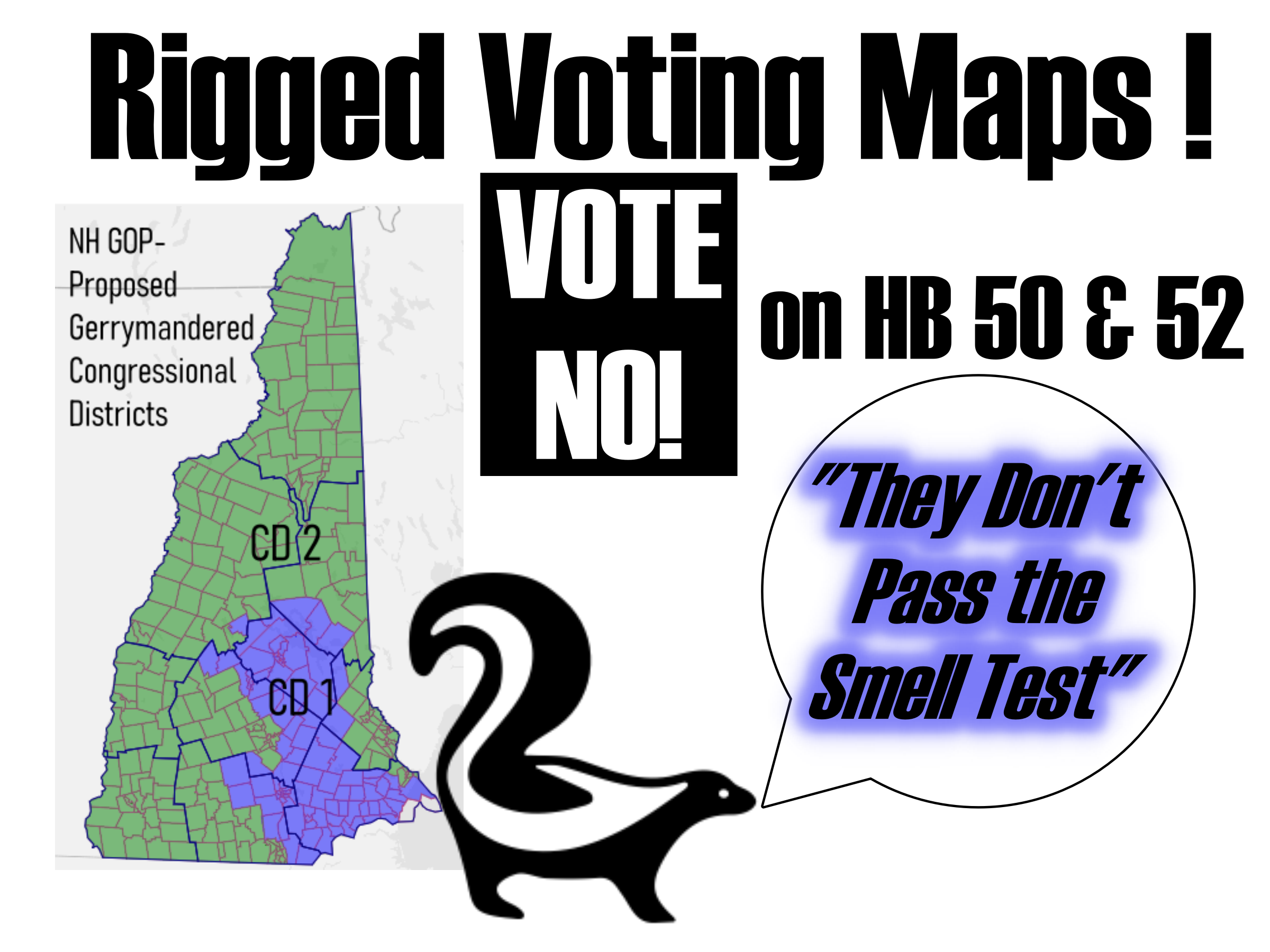 and wire legs in the garage, yes?   Print out our PDF yard "Doesn't Pass the Smell Test" sign  (Black & White or Color, preferably a laser printer) tape it to an old plastic sign*, and put it out where your House reps are sure to see it.

*Some assembly required - Sign is in 81/2 x 11 size sections, which need to be trimmed and assembled into a 21" x 15.75" sign.   I recommend covering it in clear packing tape to weatherize it.

#12  Write Postcards to House Reps --  An organized effort is in the process of sending 2000 custom-printed postcards to both Democratic and Republican NH State Representatives, asking them to vote against the HB 50 House Maps and HB 52 Congressional Maps.  You can help, too, using postcards you may have around the house, or cutting a piece of card stock into a 4x6" card, the largest allowable.   Postage for postcards when up last year to $.40 each (Thanks, Postmaster General Louis Dejoy!) 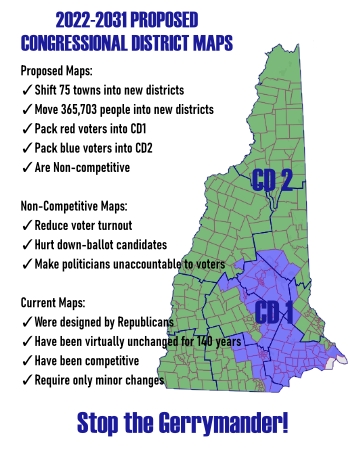 -  Addresses for Reps in PDF:  https://www.opendemocracynh.com/redistricting/NHHousePostcardAddresses2.pdf

-  Or you can download the graphic at right, and make your own.